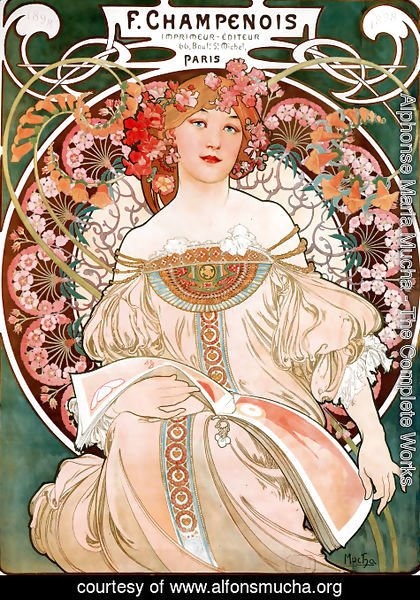 Alphonse Mucha was an influential figure in the Art Nouveau movement and was synonymous with an art style he invented. It was popularly termed le style, Mucha. He was a Czech painter, graphic designer, and illustrator born on July 24, 1860.

Mucha is best known for his distinct-styled theatrical posters. However, his famous works are advertisements, illustrations, and period designs. He manifested art in various forms and brought it to life in its most creative form. That’s why his collection comprises not just paintings but decorative panels, posters, and creative commercials.

Tap into this lucrative segment that entails all about Alphonse Mucha. Everything from his art commercials to his most successful painting series is mentioned in this guide below.

Most of Alphonse Mucha’s sketches were comprised of posters and commercial art. He designed numerous posters for various events, theatres, plays, novels, and other advertising purposes. The most iconic ones are Ruinart Champagne, Ideal Chocolate, Moet-Chandon champagne, Nestle bay, and JOB cigarette papers. However, this was not just it; Mucha excelled more in creativity and started a new trend of decorative panels.

Decorative panels were nothing but posters without text which served only one purpose, to make the space more decorative, appealing, and creative to viewers’ eyes. These were gigantic prints sold at a modest price. His first series, The Seasons, depicted four women in a highly decorative floral background.

Creativity similar to it was seen in 1897 when he brought another decorative panel of a young woman in a floral setting to life. The decorative panel was named Reverie, designed particularly for Champenois. But, not just decorative panels, the amazing Alphonse Mucha drawings also consisted of calendars.

The calendar was a beautiful creation of a woman’s head. The different zodiac signs surrounded the head of the woman. The Flowers, The Times of Day, and The Moon and the Stars were followed by The Seasons. He created over a hundred poster designs between 1896 and 1904.

The Art Nouveau painter Alphonse Mucha painted a cycle of 20 canvases between 1910 and 1928. These paintings depict the mythology and the history of Slavic people from the Czech. He spent several years working on the Slav Epic Cycle, and it turned out to be the most successful painting series of his career.

He dreamed of completing this series far earlier than it started. Unfortunately, the bump in the roads faced by Alphonse was related to finance, which led to further delays. However, in 1908, by putting so much toil into getting grants from an American philanthropist, Charles Richard Crane, he started living his dream and painted these masterpieces.

He visited places like Russia, Poland, and the Balkans to reflect his imagination straight on the canvas. E. Orthodox Monastries of Mount Athos was one of the most prominent places he visited to seek inspiration for his artwork. In these Alphonse Mucha drawings, there is one thing that speaks for itself, attention to detail.

Alphonse worked round the clock to gain perfection. He consulted many historians to grasp the potent details of historical events to invent these depictions. Finally, in 1910 he rented a small portion of the castle in Zbiroh and initiated work on this series.

A Keen Interest In Jewelry And Designs

Amongst many crafty interests of Mucha, jewellery and designs were yet another fads. The Documents Decoratifs, his book, contains elaborative designs for brooches and other pieces. In addition, he was so much into illustrations of enamel and colored stones, and in the pursuit of such interests, he collaborated with Georges Fouquet.

In 1989, he and Georges Fouquet collaborated to make a bracelet for Sarah Bernhardt. It was in the form of a serpent with the classic styling of gold and enamel. The kind of jewelry, it turned out, was similar to a piece of costume jewelry that Sarag wore in Medea. This bracelet was believed to be specially created to conceal her arthritic wrist.

Even in this, Mucha put forth his Nouveau painting style legacy. The design of the bracelet and other jewelry items shared so much resemblance to it. The Cascade pendant design is embellished with gold, opals, enamel, tiny diamonds, and a misshapen pearl.

After the 1900 Exposition, it was Fouquet who decided to open a new shop at 6 Rue Royale. It was across the street from the restaurant Maxim’s. But, he trusted no one except Mucha to design the interior. Having already worked with Alphonse, Fouquet bestowed him with this opportunity, and in turn, Mucha took it with pride. It was the beginning of exploring Mucha’s insights on matters of interiors and associated designs.

For it, he designed the centrepieces with two peacocks, which were then the traditional symbol of luxury. These luxury symbols were made of bronze and wood with colored glass decorations. A shell-shaped fountain on the sides, with three gargoyles spouting water into basins, surrounds the statue of a nude woman. Moreover, the salon was further incorporated with carved moldings, thin columns with vegetal designs, and stained glasses.

The ceiling was molded with floral and vegetal elements. All of it individually transpired the summit of Art Nouveau decoration. In 1901, the salon was opened. It was the beginning of a time to change, which resulted in a short shift from Art Nouveau to more naturalistic patterns. Thus, it was taken apart in 1923 and replaced with a traditional shop design.

The artist left behind a legacy celebrated in all corners of the world. With a touch of Art Nouveau style and creativity of his own, Alphonse Mucha left a strong imprint in the art world. Learn about Alphonse Mucha’s sketches and explore his artworks online.