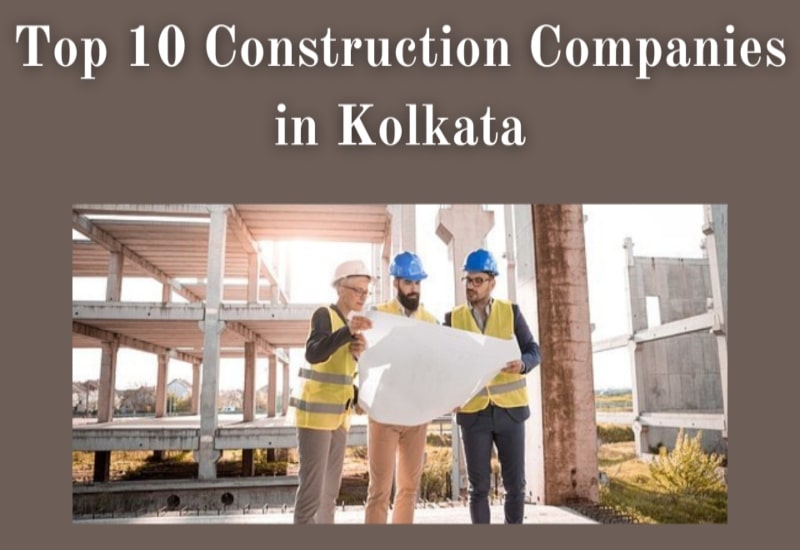 The state capital of West Bengal, India is Kolkata (formerly Calcutta). It was India’s capital during the British Raj (1773–1911), having been established as an East India Company commercial town. Currently, it is renowned for its impressive colonial architecture, art galleries, and cultural events. Furthermore, it is the location of Mother House, the Missionaries of Charity’s administrative center, which was built on the site of Mother Teresa’s grave. The list of top construction firms in Kolkata, West Bengal, is what we are giving to you.

Looking for a construction company in Kolkata? It would be difficult for you to locate a business that specializes in construction if you reside in India. Knowing which company is the best can be very difficult because there are so many that provide this kind of service. But don’t worry! The top 10 building companies in Kolkata are listed below for your reference. Additionally, you’ll learn about their areas of expertise so you may choose what will work best for you.

Leading construction business in Kolkata, Unimark Group has a project portfolio that spans over 13.5 million square feet and includes high-end residential complexes, cutting-edge commercial structures, malls, world-class IT parks, and cutting-edge integrated townships. The organization has been dedicated to transforming Indian real estate to a level of real estate development that has never been achieved with more than 25 years of experience. According to recent reports, H V Patodia, the MD of Unimark Group, would serve as Credai’s national president for two years. In India, around 13000 real estate developers who work in 21 cities and 217 cities are members of Credai.

One of the top civil engineering and construction firms in India, Adhunik Infrastructures (P) Ltd. is situated in Kolkata and has more than 12 years of experience and skill in the implementation of numerous infrastructure projects. Adhunik Infrastructures has completed more than 50 projects in a variety of industries, with a focus on the building of high-rise buildings, horticultural parks, highways, sewerage and drainage systems, and roads and bridges. The company has a track record of consistently delivering excellence while adhering to strict deadlines.

When the Swastic Group was founded in 1984, it was in response to Kolkata’s expanding need for high-quality homes. The company expanded into the New Delhi market in 2011 after finding success in Kolkata. Swastic Group has earned a reputation as one of India’s most reputable and profitable real estate developers throughout the years, as well as the top construction firm in Kolkata. Because it completes 97% of its projects on time, the company has a great track record. With a partnership with the Niros Group of Rajasthan, the company has a varied portfolio of both residential and commercial real estate.

SENBO has a distinctive corporate structure that is properly supported by technically skilled and highly competent individuals with an appropriate support structure in various functional areas at the corporate level. Near the center of Kolkata City, the corporate office is conveniently located. The organization is equipped to take on any kind of problem in building activities at any moment thanks to its extensive computer network, contemporary office furnishings and communication channels, and committed workforce.

Ambuja Neotia is one of Kolkata’s most well-known and prestigious construction companies, with a 120-year history. The business has a broad range of endeavors in its portfolio, with particular strength in residential and commercial real estate in Kolkata, as well as hospitality, healthcare, education, and start-up incubation. Shri Harshavardhan Neotia received the prestigious Padma Shri award in 1999 for his company’s maiden project, Udayan, the first condo villa in Kolkata created using the Public-Private Partnership concept. The Group, which has a reputation for constant innovation, is offering Kolkatans aesthetically built flats and more advanced, environmentally friendly workspaces to help them balance their personal and professional lives better.

The Jain Group is one of Eastern India’s most dynamic businesses in the fields of finance, hotels, and real estate, with more than three decades of experience. Jain Group has several residential and hotel spaces at advantageous locations in Kolkata, Siliguri, and Durgapur to its credit, solidifying its position as one of the best real estate developers in Kolkata. With the founding of Topaz Motors, the business has also established a well-respected reputation in the area of auto financing. Dream Homes, a reputable name in real estate projects in Kolkata, is under the Jain Group’s umbrella. In addition, the Group has expanded into the construction of five-star hotels in Kolkata, Durgapur, and Siliguri.

We have stuck to this conviction for almost three decades. And have advanced from merely being a participant in the building industry to becoming a multibillion-dollar international infrastructure behemoth.

One of the leading conglomerates in Indian real estate, Merlin Group was founded in 1984 and enjoys a stellar reputation. To its credit, the corporation has a plethora of well-known townships, office buildings, shopping centers, resorts, industrial estates, clubs, and so forth. The organization, which has been around for more than three decades, is well-known in Colombo, Pune, Chennai, Ahmedabad, Kolkata, and Raipur.

Tribeni Constructions Ltd., a limited company established by the Company Act of 1956, has been conducting business all over India for more than 25 years. We focus mostly on the building and construction industries and are dedicated to going above and beyond for our clients. At every stage of the project execution, we place a stronger emphasis on quality assurance and safety. One of the companies in the infrastructure development industry that is expanding the fastest is Tribeni Construction Ltd.

The real estate industry in Kolkata is steadily expanding as a result of the continual inflow of significant investments, growing employment possibilities, infrastructure improvements, and forthcoming real estate projects in Kolkata. In addition, Kolkata has the biggest market in Eastern India, which is a significant factor in why top real estate investors are working with Kolkata-based real estate firms. Last but not least, the PMAY Scheme and Nijashree Scheme have been introduced by the Central Government in collaboration with the State Government of West Bengal.

For More Information About The Companies, You Can Visit Our Companies Section