Harshita Kejriwal Biography: An Identity Beyond The Daughter Of Arvind Kejriwal 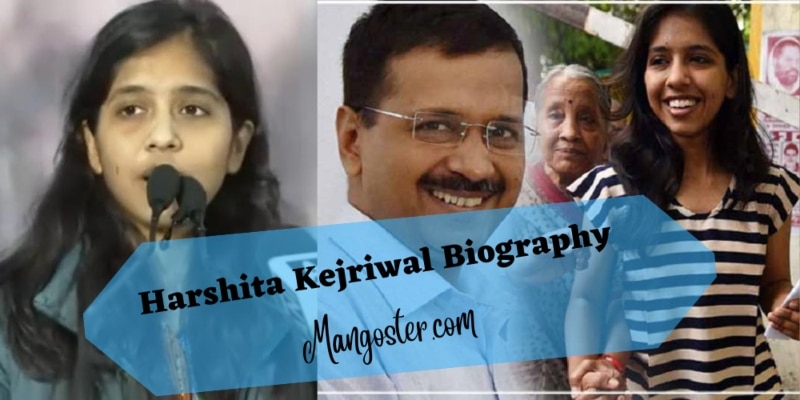 Many of you may recognize the name Harshita Kejriwal as Arvind Kejriwal’s daughter. However, she is an entrepreneur and associate consultant for numerous flourishing businesses. She has created an identity of her own. Which has made fans interested in knowing more about her.

Harshita Kejriwal is 5-feet 5-inches tall woman with a thousand feet tall dream of serving the nation. Her mother, Sunita Kejriwal is a retired IRS officer and her father is the seventh Chief Minister of Delhi. Living in a family of politicians and officers, she knew what she needed to fulfill her dream. She has a flourishing educational and athletic background that inspires many.

This 26-year-old woman is an entrepreneur, a sportsperson, a dancer and much more. She has keen interests in many fields and accomplishes every task assigned to her. To know more about her background and fame, follow this article of Mangoster to the end.

Who is Harshita Kejriwal?

In the year 2012, Harshita’s father founded the political party popularly known as AAP or the Aam Aadmi Party. This led him to soon become the seventh Chief Minister of Delhi. Harshita’s grandfather, Gobind Ram Kejriwal, is an electrical engineer and her grandmother’s name is Gita Devi. In short, Harshita Kejriwal belongs to a well-to-do and well-educated family.

Soon after her graduation, Harshita jumped into internships. She completed her first internship in July 2016 from The Imperial College of London. In the month of August the same year, she completed a one-month internship at IIM Lucknow. Harshita Kejriwal was an exchange program student at Pohang University of Science and Technology, Pohang, Gyeongsangbuk-do, Korea from September till December 2016. To add to the list, Harshita completed another internship at ITC Ltd. in Guntur, India.

With all the experience she had, Harshita was offered a job at the Boston Consulting Group popularly known as BCG. She accepted the job and worked as an Associate Consultant till April 2020. Later, Harshita co-founded Basil. Basil is a company in the food and health industry that provides consultation and advice in the same field.

Her Hobbies And Interests

Harshita Kejriwal is an exceptionally talented woman with multiple interests. Dancing, reading books, playing football and traveling are some of her hobbies. She won the title of under 19 football championship at the district level in 2010. In 2015, she won the title of Walmart Women Empowerment Grant along with being the winner of Enactus Nationals. She was also a finalist at the Enactus World Cup in Johannesburg, South Africa.

Is Arvind Kejriwal Daughter Married Or Dating Anybody?

Although not much is known about the personal life of CM of Harshita Kejriwal, we know for sure that she is unmarried as of today. Whether she has had any boyfriends or is emotionally involved with anyone is a mystery.

What Is She Famous For?

Harshita Kejriwal is popular as the seventh chief minister of Delhi Arvind Kejriwal daughter.The political presence of her father is definitely one reason behind her popularity but that is not the only reason. She is a successful entrepreneur and co-founded the brand Basil. She has always been in the news for her academic and athletic achievements. Besides other things, she was all over the news when she scored a 96% in her 12th board examinations. Harshita has also been in the news for being the victim of an online fraud.

One will not find Harshita Kejriwal in politics often. She makes her appearances on some occasions only. When politicians from the Bharatiya Janata Party called her father a terrorist, she appeared to speak on his behalf. Apart from this, Harshita has also attended few rallies and even delivered speeches at some of them. She is not very involved in her father’s party but never leaves a turn to support the party.

10 Things About Harshita No One Told You

Born to a former IRS officer and an IIT graduate, Harshita Kejriwal has lived a luxurious life till date. She is blessed with both fortune and talent. A look into her career and hobbies tells us she is an active woman. She has an exceptional educational background and a very enterprising sports background.

A woman with many awards and scholarships in her name, she is definitely an inspiration for many students from this generation. The fact that she managed her education with sports and internship, shows how well she manages herself and her time. The success of the company ‘Basil’ co-founded by her inspires yet more people. She definitely is the daughter and father would crave. Without a doubt, we can say that she has upheld the name and fame of her family well.