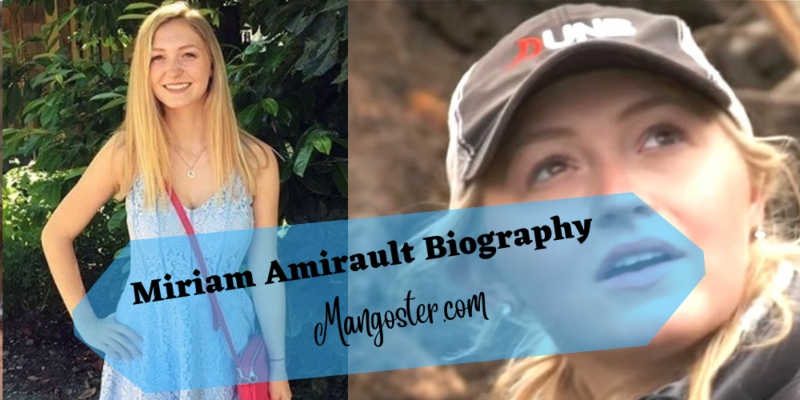 The Curse Of Oak Island saw Miriam Amirault in the eight episodes of Season 8. Despite her short stay on the show fans grew fond of the self-assured, young , confident and smart Miriam.

She became yet another name in the list of people who got famous after their television appearance. However, if you are an enthusiast for collecting antique objects and goods, you might have come across the name of Miriam Amirault even before the show, for she is a young archeologist and alum of prestigious UNB archeology.

Fans wanted to know more about her soon  after the show. The Curse Of Oak Island is a show that runs on a storyline where people from different fields come across the island in search of hidden treasures. The Lagina Brothers search for mythical treasure on the coast of Nova Scotia in this documentary. With each season the mystery about the island grows. The popularity of the show also made fans interested in Miriam Amirault, who was one of the characters of the show.

Fans wanted to know more about her. Who is Miriam? Is she married? What did she do post show? I am sure all these questions might be giving your stomach a tough time with the curiosity it builds. So if you want to know everything about Miriam Amirault, follow up this article on Magoster and give a break to your curious mind. This article has all the information you are willing to know about Miriam Amirault and “The Curse of Oak Island”.

Who is Miriam Amirault? A Brief Note

As we mentioned before Miriam is an archeologist by profession. She traces her origin to Canada from the city of Digby. Born in 1998 the young archeologist is just 24. Her educational qualifications signify her as a bachelor holding a degree in honors for Anthropology in classical studies in 2020 from the University of New Brunswick. She dreamt of becoming an archeologist and her passion for the field led her to take one step ahead. One of the major factors that boosted her interest in the field of Anthropology was her residence which was only a few hours away from the university and fell in love with the research work.

Being a bright student in her college Miriam Amirault was invited by her professor to the excavation in Cuba. Since the place is well-known for its people’s luxurious lifestyle there was no chance of her denying the offer. And that was the right opportunity where she realized that it is the perfect subject of her interest and she can go with it for her further semesters and graduate along with it.

Who started “ The Curse Of Oak Island”

The legendary series was started by a pair of brothers named Marty and Rick, who on the island coast of Nova Scotia started the search for an infamous treasure. The show’s first season started in January 2014 and till now it has successfully covered 9 popular seasons. The show has got an IMDB rating of 7/10 in the genre of Reality Television. Often the Lagina brothers get help from the local people, be it historians, researchers, or archeologists who take part in the search operations and make the show more interesting. Recently the appearance of Miriam Amirault a young archeologist in the show made people curious about the blonde girl and gained the show more popularity.

Soon after completing her graduation in 2020, Miriam was offered a documentary show on the history channel by the same professor Dr. Taylor who took her to Cuba during the excavation process. Miriam was smart enough to grab the opportunity and work as a professional in the field of Archaeology and make her television debut at this young age. Her growing interest and dedication in the field of her studies paved the way for her successful start. She made her first appearance in the 8th season of the show and was also the first character for the season. She gained much more fame and followers through television than she expected.

Does Alex Lagina Have Connections With Miriam Amirault?

It is an obvious thought to come into the minds of fans watching their star’s chemistry in Miriam Oak Island journey and thinking of their chances with one another. The personal life of Miriam Amirault has always been a secret. She loves to keep things private and tries to safeguard herself from indulging in any controversy. For the fact to clear the air of rumors Miriam and Alex have never claimed anything that signals the chances of they both being together. Now since Miriam has been featured on a television show it would be difficult for her to get away from the media who are often looking for something new in people’s lives.

Sources have also found that Alex is currently in a love relationship with the famous social media personality and fashion blogger Katherine Seed. Lately, they have been found active on each other’s Instagram profiles Following his birthday Katherine wished Alex his birthday and also wrote a message

that she is looking forward to traveling together soon.

What Are Miriam Amirault’s Plans?

We saw that Miriam was a successful actor in the television show industry. However, she left the famous show named “The Curse of Oak Island” after completing the two successful seasons which she entered with the help of her college professor.

Now the woman has a growing interest in forensics and currently she is working at the University of  Brunswick. Miriam will be departing for Toronto to study forensics at Humber College. The lady has a sharp focus and with her experience in the field of archeology, she must succeed in her higher education.

Net Worth Of Miriam Amirault

When Miriam used to work with the Lagina brothers in their famous television show her net worth in the year 2021 was estimated to be $1 million. Now as she doesn’t work with them the numbers may fall as she is not working according to her previous levels and may end up earning less. Her net worth includes every single asset and earning that she possesses.

What Is The Username Of Miriam Amirault’s Instagram Profile?

The username of Miriam Amirault Instagram is not known. The lady loves to live her life in complete privacy and enjoys her own company over others.

What Is The Height Of Miriam Amirault?

How Much Miriam weighs?

The performing actor and young archeologist Miriam Amirault weigh around a measure of 60 kgs.

Where Was Miriam Born?

Canada is known to be the birthplace of Miriam Amirault. She lived with her parents in Digby town.

Was Miriam Engaged With Alex Lagina?

No, there were no signs or claims from the star’s side being involved with Alex Lagina. She only possessed the relationship of a co-actor with Alex.

What Is The Name Of Miriam Amirault’s Parents?

There is no information available on the internet regarding the family background of Miriam Amirault.  Fans are eager to know more about her personal life. Hope she understands the curiosity of her fans and shares some information with the news-gathering media.

From Which University Did Miriam Pursue Her Bachelor’s Degree?

Miriam completed her graduation from the University of Brunswick