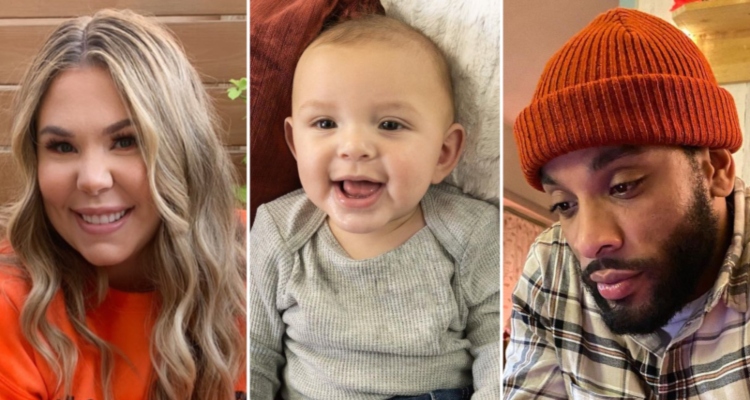 Kailyn Lowry has recently decided to add her last name to her 5-month-old toddler. It is clearly evident that this is a result of her ongoing feud with Chris Lopez. Kailyn has always been vocal about Chris not being available for the kids and failing to be a good dad. The almost always-in-news kid, Romello is again in news for a change in name.

Parented by Kailyn Lowry, the actress from Teen Mom 2, and Chris Lopez, Romello Creed Lopez has allegedly already faced a change in his name in the past. When Kailyn’s fourth son was born, Kailyn named him Creed Lowry but then later decided to add “Lopez” to his name.

Today, she aims at adding “Lowry” back to his name. This clears the air that things are not easy between Kailyn and her ex, Chris. Kailyn blames Chris for not being present for his son as a father.

Amidst all the other things, she has told the fans how her kids will not be celebrating Christmas with their families. All this is because of the unsettling tension between her present partner and Chris.

But what all led her to decide on a change in her son’s name? What does Chris have to say about his absenteeism as a father? And how has their relationship been in the past: let’s find out!

Mangoster has tried to cover the details about buzz over why Romello Creed Lopez turned to Creed Romello Lowry Lopez.

Who Is Romello Creed Lopez?

Creed Romello Lopez, at a tender age of 2 years has already become an internet sensation. For the good or the bad, his name is all over the internet, and all credits goes to the undying feud between his famous parents! Both of his parents are actors from the popular American TV show ” Teen Mom”. No doubt, everything about this toddler becomes news!

Creed has been under spotlight right from his birth. This was also because Romello Creed Lopez was born when Kailyn was a part of the popular show.

The young boy enjoys a privileged life. Both the parents have earned quite some money to give him a lavish life. However, whether they are able to give him a peaceful life or not, is still a debate!

Romello Creed Lopez owes his being in the limelight to his parents: the star from Teen Mom 2, Kailyn, and a crew member from the same show, Chris Lopez.

Born on March 8, 1994, Christopher ‘Chris’ Lopez is a supporting crew member from the cast of Teen Mom 2. He also uploaded podcasts for a long time. He is more famous as Kailyn’s on-and-off boyfriend.

Lopez comes from Delaware and mostly keeps his private life away from social media. However, the many controversies and allegations existent between Chris and Kailyn were never overlooked by fans.

Kailyn Rae Lowry was born on March 1, 1992. She is from Nazareth, Pennsylvania. When Kailyn was 17, she got pregnant by her boyfriend back then, Jo Rivera.

When her family was unsupportive of her child, she turned to Jo’s family for support. After the birth of her first son, Isaac Elliot Rivera, Jo was chosen as one teen mom in the show “Teen Mom 2”.

She later fell in love with Javi Maroquin and gave birth to their son, Lincoln Marshall, her second child. After a miscarriage, the couple faced marital problems that later led to their divorce.

How Was Romello Creed Lopez’s New Name Revealed To The Fans?

When a fan commented on Kailyn’s Instagram post asking Creed’s full name, she revealed his name was changed to Creed Romello Lowry-Lopez.

There are a lot of controversies as to why Lowry decided to change Creed’s last name.

Only some time ago, Chris welcomed his third child. Kailyn is not this child’s mother. In an Instagram post, Kailyn revealed this well-kept surprise. She posted a Congratulations to Chris and his new family while also sharing how excited she was to see her sons have another half-sibling.

As a reply to her post, a fan commented that he did not find it cool when Kail (Kailyn) announced the big news that Chris would have waited to reveal to the public.

Kailyn’s hasty revelation of Chris’s big news is possibly connected with how she is feeling about her ex-boyfriend having a kid with another woman. However, she added in Creed’s and in Lux’s Instagram bio that CJ was their brother.

To this, Chris revealed that he was not very excited when Kailyn revealed his big news. Through a post, he revealed how he felt about this. It said that regardless of the situation, the way it (the news) came out, he doesn’t even care. He said that she (Kailyn) will not be able to disrupt his peace and that he was trying to be as peaceful as he can, in the situation that prevailed.

All this fuss indicates that this could be one reason behind Kailyn’s changing Romello Creed Lopez’s name.

Chris Accused Kailyn Of Threatening Him

Through Instagram stories, Chris began to start accusing Kailyn of threatening him. He said she tried to threaten her with violence.

He also mentioned the presence of Kailyn’s boyfriend, Elijah Scott, in the car where she allegedly threatened to beat him up.

After his post on Instagram, Chris turned to Twitter where he still maintained the fact that he had been threatened. He tweeted, “Out here talking bout you’ll beat me up now you know you gotta protect the belly stop it”

This tweet of his indicated her fifth pregnancy while still mocking what she said. Although these posts are now deleted, they are proof of the tension between the co-parents. This could be another possible reason for Kailyn changing her son’s name.

Kailyn Accuses Chris Of Being A Violent Father

Kailyn has her latest book published under the name “A Letter of Love.” In her book, Kailyn talks about love, life and relationships.

Apart from all this, the book also contains details about Kailyn’s past relationships. In the same, she has written about how Chris behaved while in a relationship with her.

Kailyn has talked about how Chris’s violent behavior towards her led her to cut him off their kids’ lives. Out of some instances mentioned in the book, one mentions how he broke Lawry’s bedroom window and also the house’s back door, all while the kids were still home.

If what she wrote in her book is true to its extent, this explains why Kailyn decided to change their kid’s name.

For a very long time now, Kailyn has accused her ex-boyfriend and also her son’s father to be absent from his duties as their father.

It is natural for a mother to be angry at an absent father. Parenting is not an easy task and both Kailyn and Chris know this. This might be another reason behind Kailyn’s decision to change Romello’s name.

It is well known to all fans that Kailyn and Chris’s relationship has always been an on-and-off one. When couples are never sure about each other, they become unpredictable wherein they fight like it’s the end for some time and sometimes love each other like everything is fine.

This ever-changing pattern leaves an ill effect on children and may be one reason they finally decided to give up on each other.

It is also known to almost all of us that Chris and Kailyn had their first pregnancy together when they least expected it. This must have made it even more difficult for the couple to be on the same lines in parenting.

Even with all these controversies and accusations and the fact that Kailyn has changed the name of Romello Creed Lopez to Romello Creed Lowry-Lopez, we see that there is still some love in the family.

Chris has made it public how he tries to be a good father. He acknowledges that the coming of his sons started a new chapter in his life and that he intends to be available for them as much as he can.

Kailyn is also excited and happy as she accepts CJ as the half-brother of her sons. She added his name in both of hers and Chris’s sons while she changed their usernames to @mellolowry and @luxlowry.

By changing her son’s name, Kailyn has left the public surprised and shaken. Fans are left to linger about thinking what the actual cause of this change could be. However, when asked if she would change the name of all the other kids and add her name to them, she remains silent.

But from all we have seen, it is evident as to why she chose to add her name to her son’s name: to mark that she is separate from Chris and that they are not one in parenting the kids.

When promoting your business online, you'll want to be sure you're taking advantage of the tools that will help you earn more links to...
Read more
- Advertisement -

Only Custard-style Ice Cream Outside The United States

Considered the jewel of the Americans, the state of Wisconsin not only gave the world the Green Bay Packers football team, but also the...
Read more
Career

The employment world has undergone significant transformations in the last decade and is unlikely to be the same. With many jobs becoming automated and...
Read more
Health

7 Must-have Converse Sneakers For Every Type Of Sneaker Enthusiast

It's incredible how Converse has evolved into a multipurpose shoe that the entire world knows and adores. Converse has developed its sneakers by employing...
Read more
Related News
Digital Marketing

When promoting your business online, you'll want to be sure you're taking advantage of the tools that will help you earn more links to...
Read more
News

Only Custard-style Ice Cream Outside The United States

Considered the jewel of the Americans, the state of Wisconsin not only gave the world the Green Bay Packers football team, but also the...
Read more
Career

The employment world has undergone significant transformations in the last decade and is unlikely to be the same. With many jobs becoming automated and...
Read more
Health

7 Must-have Converse Sneakers For Every Type Of Sneaker Enthusiast

It's incredible how Converse has evolved into a multipurpose shoe that the entire world knows and adores. Converse has developed its sneakers by employing...
Read more
News

Fifteen Dead In A Plane Crash In North Carolina

Fifteen people perished Tuesday evening in a plane crash, near the airport of Raleigh/Durham, in North Carolina. According to the police, there are only...
Read more
- Advertisement -